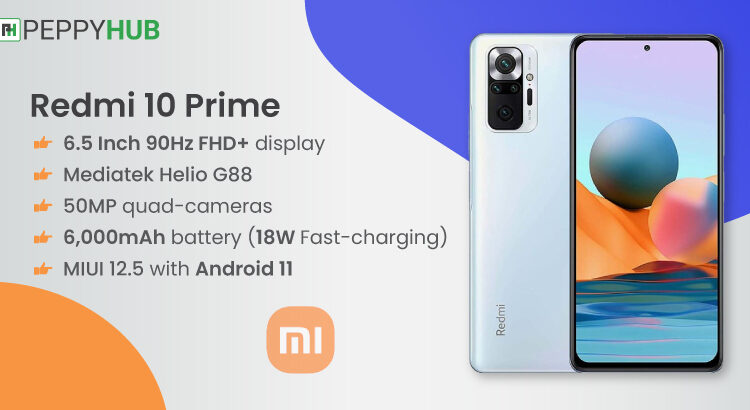 Xiaomi Redmi 10 Prime in India is available for Rs 12,499 as a starting price. It has an Helio G88 CPU, a 50-megapixel quad-camera array on the back, and a 6000mAh battery. Everything you need to know about the Redmi 10 Prime is right here.

Redmi’s latest low-cost offering, the Redmi 10 Prime, has arrived in the nation. It succeeds the Redmi 9 Prime, which was released in August of last year. Despite the new moniker, the gadget is just a rebranded Redmi 10 with a bigger battery. The Redmi 10 Prime has a design that is quite similar to the Redmi Note 10 series. The smartphone has a scalable, high refresh rate display, which is one of the enhancements. In addition, the Redmi 10 Prime receives updates to its RAM, CPU, camera, and battery.

The smartphone has a 6.5-inch LCD display with a high refresh rate of 90Hz. It has a MediaTek Helio G88 processor and up to 6GB of RAM and 128GB of internal storage. A quad-camera setup with 50 megapixels is found on the rear. For selfies, there is an 8-megapixel camera on the front. A big 6000mAh battery powers the smartphone, which also supports 18W rapid charging. Xiaomi has priced the Redmi 10 Prime at Rs 12,499 for the basic model and Rs 14,499 for the top model. Let’s read the key specifications of the Xiaomi Redmi 10 prime price in India.

1. The design of the Redmi 10 Prime differs from that of its predecessor. It is, however, little distinguishable from the Redmi Note 10. On the back, there’s a rectangle camera module, and at the bottom, there’s a Redmi banner. On the front, it has a punch-hole camera in the center. There’s also a 3.5mm audio connector and a fingerprint scanner on the side for security. Phantom Black, Astral White, and Bifrost Blue are the three color options available from Redmi.

4. A 6000mAh battery powers the Redmi 10 Prime, which supports 18W cable charging and 9W wireless charging. With the Redmi 10 Prime, you will receive a 22.5W charger. In terms of connectivity, the smartphone supports Bluetooth 5.1, GPS, Wi-Fi, 3.5mm audio jack, and USB Type-C.

Lets see some pros and cons:

For purchasers, the Redmi 10 Prime overcomes the Rs 12,000 threshold, transforming it from a budget to a mid-range handset. It is powered by the latest MediaTek Helio G88 CPU, but only has 4GB of RAM. The LCD panel has a refresh rate of 90Hz and a Full HD+ resolution. The storage can be expanded, and the phone is easy to handle even with a 6,000mAh battery. However, the cameras and 18W charging support are also average for the price. These are about the Xiaomi redmi 10 prime price in India.