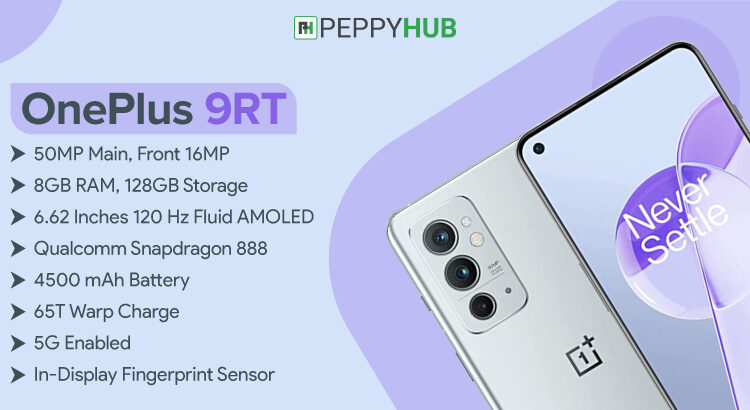 OnePlus has officially introduced the OnePlus 9RT in India, accompanying the OnePlus Buds Z2, after days of anticipation. The announcement comes only days after OnePlus unveiled the next-generation OnePlus 10 Pro in China. Here we have mentioned the OnePlus 9RT specifications, price, availability, and the OnePlus 9RT launch date in India.

The OnePlus 9RT is the successor to the inexpensive flagship phone OnePlus 9R, which was first released in China late last year. It comes with a plethora of improvements, the most notable of which being the addition of the Snapdragon 888 SoC, which replaces the Snapdragon 870 seen in prior generation devices.

The OnePlus 9RT, unlike the company’s flagship phones, does not include a Hasselblad-tuned camera arrangement; instead, it sports a triple camera setup with the primary sensor being a 50MP wide-angle snapper. According to OnePlus, the phone is packed with superior 4D haptic feedback, a VC liquid cooling system to keep the temperatures under control, and a 600 Hz touch response rate to provide an immersive gaming experience.

Nano Silver and Hacker Black are the two color options for the phone. Starting January 18 during the Amazon Great Republic Day Sale, the phone will be available on OnePlus.in, OnePlus Store App, OnePlus Experience Stores, Amazon.in, Reliance Digital, My Jio, Croma, and other partner stores.

In terms of the launch deal, the business is giving Axis bank cards an instant payback of Rs. 4,000. Owners of OnePlus smartphones will receive an extra Rs. 4,000 in exchange incentive.

10 Best WordPress Security Plugins to Protect Your Site In 2022